A year ago, author Jewel Kats discovered my needle-felted animals and characters through my Etsy store. She became an admirer of my work and asked if I would illustrate a book for her.  I read the story; it touched my emotions and made me cry. I said "yes" and started on a journey.

Now, the thought of illustrating a children's book was not a foreign idea. I have had daydreams about writing and illustrating a children's book for many years. In fact, I have written a few that are stashed away. The illustrating part was a little trickier. I've had artistic talent since childhood when I would wile away the hours drawing. I later dabbled in watercolor and colored pencils. The problem is that I never stuck with any medium long enough to become really proficient.

When Jewel asked me to illustrate a book, I first considered posing my needle-felted characters among doll furniture. However, I thought it would be much more interesting if I created all the scenery in wool. Wool has a soft and dreamy quality that differentiates my style.

After I illustrated the first book (which has not yet been published), Jewel asked me to illustrate a second. I read the book, and again I cried -- I'm a bit of a softie. I said "yes," and created the illustrations for Hansel & Gretel: A Fairy Tale with a Down Syndrome Twist.

The book is available on Amazon and Barnes & Noble.

The illustration process has been quite an adventure. Although most of the illustration is needle-felted, I have also used some wet felting and a technique in which the wool is pressed together. My brain has gotten a workout figuring out how to create a fireplace, a forest, candy houses . . . The illustrations are mostly wool, although I have used some wood.

I am amazed to have created this illustration style. I'd love to hear your comments.

I will include an Amazon link to the book when it is published. Here is some information from the press release:

Jewel Kats Tells Adventurous Tale of Hansel, a Brave Boy with Down Syndrome
Ann Arbor, MI – From the award-winning author of Cinderella’s Magical Wheelchair: An Empowering Fairy Tale comes another empowering children’s book, Hansel & Gretel: A Fairy Tale with a Down syndrome Twist (Loving Healing Press, October 2014).
This adaptation of the classic Grimms’ tale includes the wicked witch and the poor siblings in search of food; but in this version Jewel Kats’ main character, Hansel, is a mischievous, yet courageous, five-year-old boy with Down syndrome.
Young readers of the book will get the message that children with Down syndrome are capable and can achieve extraordinary success with determination. Hansel’s story will also teach by example that people cannot be judged by appearance; a princess or a hero can be hidden within. Jewel Kats’ insightful story is brought to life with enchanting illustrations in wool by fiber artist Claudia Marie Lenart. Also making the book special is the dreamy style achieved by the artist with needle felted wool – a first in childrens’ book illustration.
Praise for Hansel & Gretel: A Fairy Tale with a Down syndrome Twist
“I love that this book addresses not only the low expectations that society has of kids with Down syndrome but that the Mother has as well.   What a gifted author to see past the diagnosis and tell a magical story of potential and belief!”
––Nancy Gianni, Founder & Gigi’s Mom, GiGi's Playhouse: Down Syndrome Achievement Centers

“This story would help young readers look beyond disabilities and focus on the characters of those who have special needs. Claudia's breathtaking illustration take this beloved tale to a whole new level.”
––Shaila Abdullah, author of My Friend Suhana


Posted by Claudia Marie Felt at 8:24 AM No comments:

I love dogs, always have. When I was a child, we moved to an apartment where I could no longer have a dog. Our Tammy went to live with grandma and I was so sad; I yearned to have a canine companion. As an adult, I've always had dogs, as many as three at a time. I currently have two--Lily, a husky mix, and our puppy Angelina, a border collie/Aussie mix.

When I create needle felted dog portraits I spend a lot, lot of time studying photos of the dog as well as photos of the breed from every angle. I grow to love the dog and feel as if I know him/her. 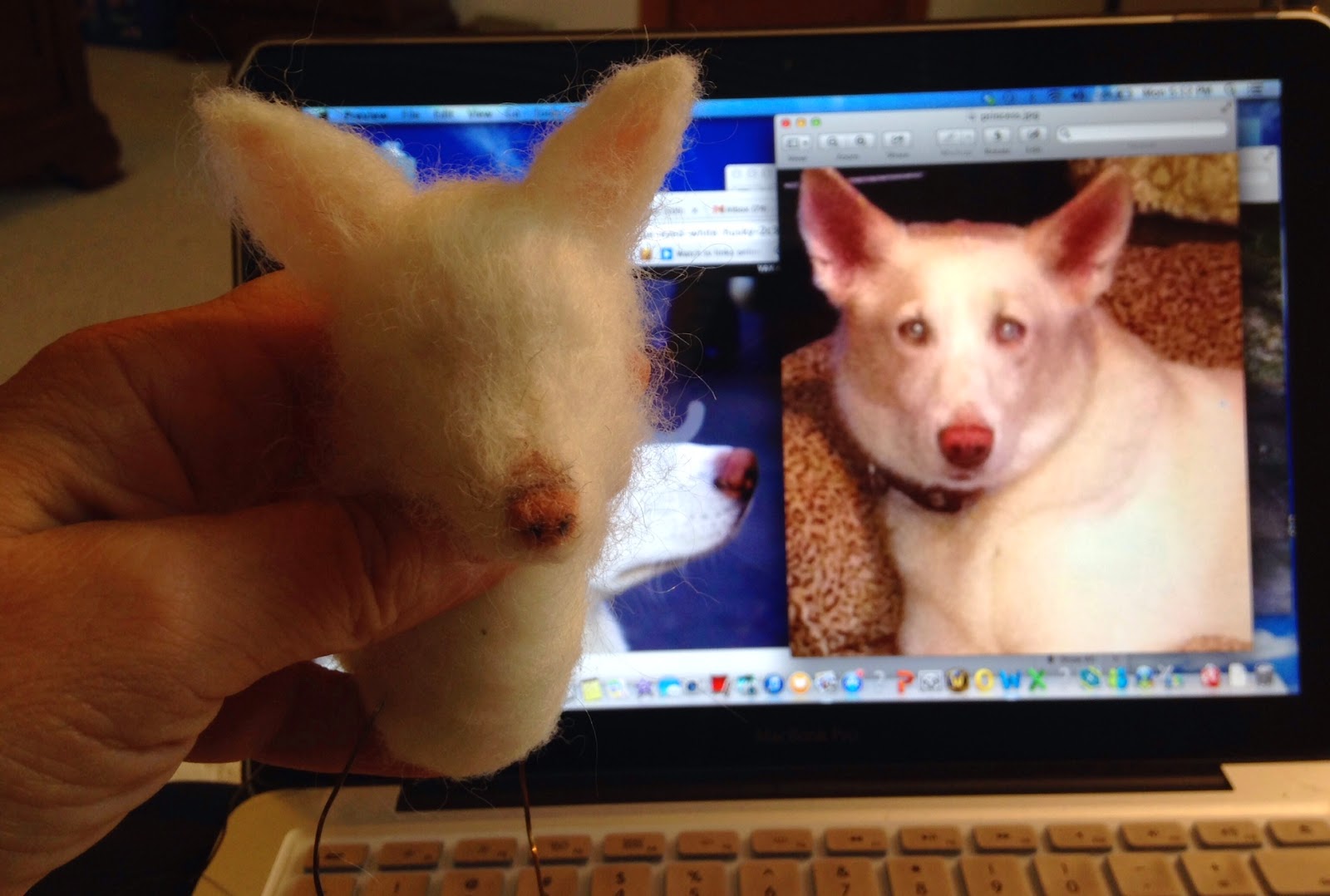 I always start with the face, being certain the position of the ears, eyes and nose are correct. The eyes take the most time. I create them in layers--iris, pupil, light dot and then line the eyes and poke, poke, poke until it is shaped and sized correctly. The legs require multiple layers. The final layer of the dog is usually soft alpaca wool.

Sometimes, the pet owner sends me fur from the dog and I incorporate that into the sculpture. Most often, I mix in a little of the fur with alpaca. I believe it brings a little of the dog's spirit into the sculpture. When I created a Bouvier des Flandres I was sent a large envelope of the dog's fur and I was surprised just how well it felted; in fact it was nearly indistinguishable from the rose grey alpaca. 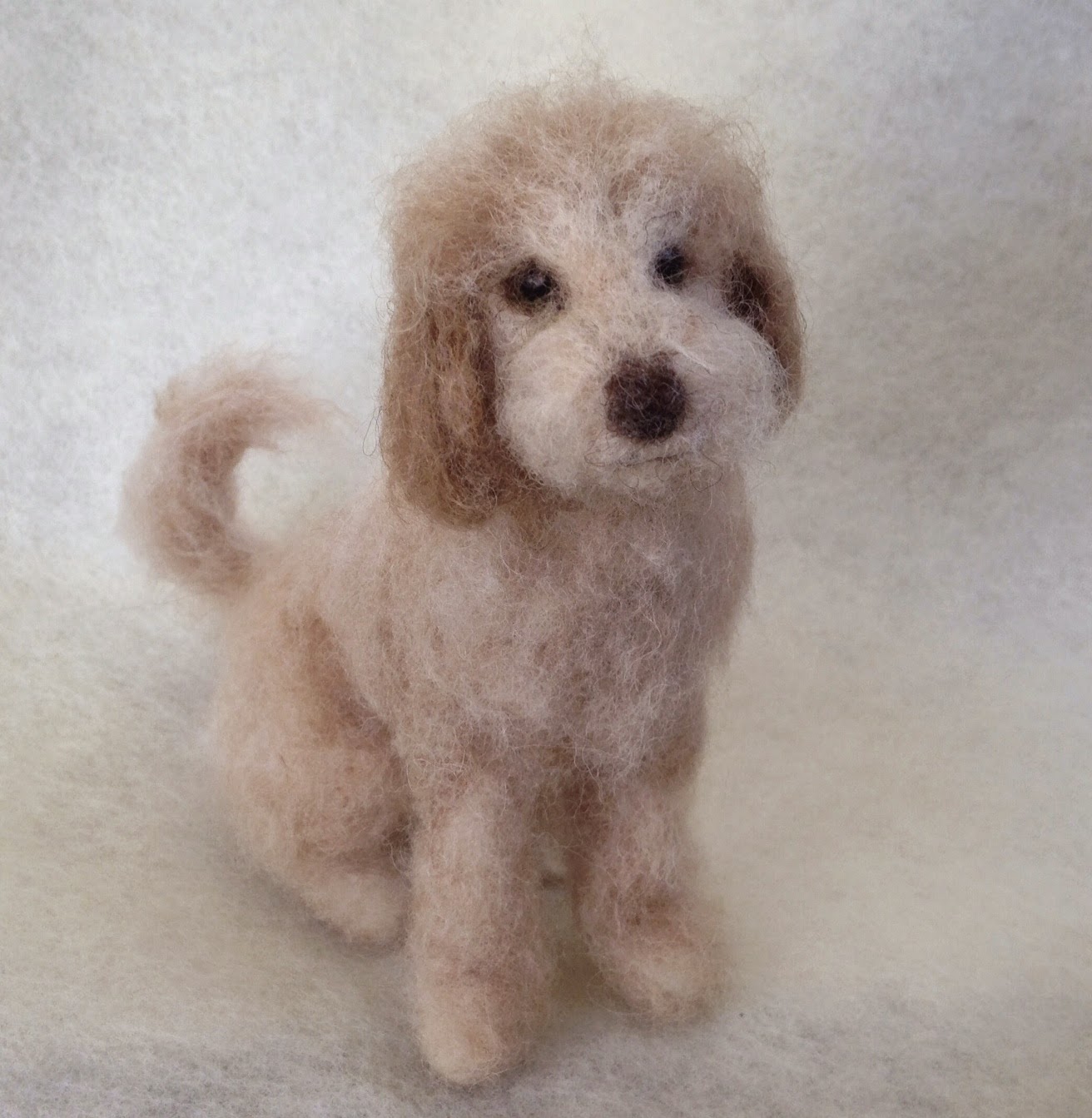 Quite often the portraits are of dogs that have gone over the rainbow bridge. It gives me a warm feeling to know the sculpture brings comfort to the dog's companion.

Here is what one customer said about her pet portrait:
OMG.. I can only say CLAUDIA could not have recreated my Precious Calli any better. I opened the box and cried and cried because I felt as if I had my Calli back in my hands and back by my side again! Just a smaller version! ;) AMAZING work!

Hope you enjoy my dogs!

Posted by Claudia Marie Felt at 4:53 PM No comments: