Thumbelina, Doorway to the Wee World


There is a reason Thumbelina, as well as Tom Thumb, are among the most loved of fairy tales. They take us into the wee world where we can explore what it is like to float on a leaf and fly on the back of a songbird.

Life in the teeny, tiny world is fascinating, hence the trend of fairy gardens. Just walk into your garden and imagine life as Thumbelina -- a flower bed becomes a jungle, small rocks are boulders, and the butterflies . . .

I think small children especially relate to Thumbelina, because they do live in a world where they feel little among adults.


I prefer the Thumbelina version in William Bennett's Book of Virtues. In this version Thumbelina goes for a stroll and enjoys a sailing ride with a fish, explores a field mouse's home and flies with a songbird. I like this version because Thumbelina is childish and in the end she is returned home to her mother. Bennett puts this tale in the Compassion section as Thumbelina's kindness toward the bird results in her happy ending.

Of course in Anderson's original Thumbelina, she is abducted by creatures who want to marry her --first a toad, then a cockchafer, and a mole. This story is one of perseverence as Thumbelina survives, helps a sick bird who then takes her to a wonderful fairy land where she finds her true love, the elf prince.


The Thumbelina story can also be seen as a tale of being different; perhaps some people saw pretty little Thumbelina as disabled, but in fact, she could do things others could only dream of. In the end, she found the elf-prince who was her own kind.
Posted by Claudia Marie Felt at 7:48 AM No comments:


At the heart of each fairy tale lies a kernel of wisdom about man and this  wisdom nourishes the children. They are truly hungry for it.  -- Dorothy Harrer Educating as an Art: Essays on Waldorf Education

The tale of the sleeping princess is a tale of transformation. The earliest version of the story is French and dates back to the 1300s with Le Roman de Perceforest.
Giambattista Basile wrote the first full collection of fairy tales, Il Pentamerone, in 1634, and included Sun, Moon and Talia, a sleeping beauty tale. The versions we are more familiar with are Charles Perrault's Sleeping Beauty in the Wood (1697) and the Brothers Grimm Briar Rose, 1812.


In all varieties of this tale, there are magical women who attend the celebration of the child's birth, either goddesses or fairies, and bestow gifts upon the newborn child. One of the fairies is snubbed and puts a curse on the child.

“How wonderful it is to hold an infant and wonder about the new gifts that the child has brought to earth," wrote Waldorf Kindergrten teacher Joan Almon. "To be in the presence of the newborn is like stepping into the fairy tale of Sleeping Beauty and watching the twelve wise women come forward to bestow their special gifts . . . When we think of the child as animal-like or machine-like, we play the role of this thirteenth wise woman who wished death upon the child without the possibility of transformation or metamorphosis. Fortunately in the fairy tale, the twelfth wise woman had not yet made her wish and she now came forward. The story says she could not take away the evil sentence, but she could soften it, and she said, ‘There will be no death but a deep sleep of one hundred years.’ We are being asked to be the twelfth wise woman for today’s children, taking away the sting of materialism, the denial of the spirit, which so threatens the spirit of childhood.


In the earliest tales of Sleeping Beauty, the princess is raped in her sleep and bears a child. The Perrault and Grimm versions clean up the tale to one that is more suitable for young children.

The essential transformation in the tale is puberty, according to Bruno Bettelheim, "The Uses of Enchantment: The Meaning and Importance of Fairy Tales." Sleeping Beauty pricking her finger on the spindle is a symbol for menstruation. Teenagers must go through a long sleep as they mature into adulthood.

However, young children will not understand the puberty symbolism. They will see it as a tale of transformation, a tale of triumph over death, a story that portrays the value of patience. There is a time for every season, no need to hurry. A nice long sleep is good for the flowers in the garden and good for the human spirit as well.

Sleeping Beauty: A Fairy Tale 700 Years in the Making

The Secrets of Symbolism and Myth

Posted by Claudia Marie Felt at 8:40 AM No comments:

How I Made Tiny Felt Food for Needle Felted Book Illustration

I recently was at a book fair where a 5-year-old boy purchased Hansel & Gretel: A Fairy Tale with a Down Syndrome Twist.  I asked him which picture was his favorite. He told me he liked the candy houses because it looked like the candy was popping out of the page and he wanted to eat it.

It was gratifying to hear from a child that he connected with the 3-d illustrations. When Jewel Kats asked me to illustrate this book, I was immediately excited about the forest scenes, but I wasn't sure how to handle the candy houses. To be honest, I don't get particularly excited about candy, but I do like cakes, cookies, fruit. So with the gingerbread house, I added some window boxes with iced berries, chocolate chip cookie trim, and of course candy canes lining the entry. The other candy house (you have to read the story to find out why there are two) was created during Easter and you can see how that influenced the design, pastel M&Ms, lollipops and even Peeps on the lawn.

Creating the sweets in both candy houses and for the feast scene was an exercise in trial and error. This is not a step-by-step tutorial, but I will share some tips and techniques I used. I hope you can be inspired and create some fun felt food.

Have fun creating! I'd love to see what you come up with and you can share on Claudia Marie Felt on Facebook.

Posted by Claudia Marie Felt at 9:28 AM No comments:

How to Make a Needle Felted Bunny

I have updated my needle felt bunny tutorial and I am now offering it in my Etsy store.

My new tutorial is very detailed. It is a 12-page instant download PDF with 64 photos. 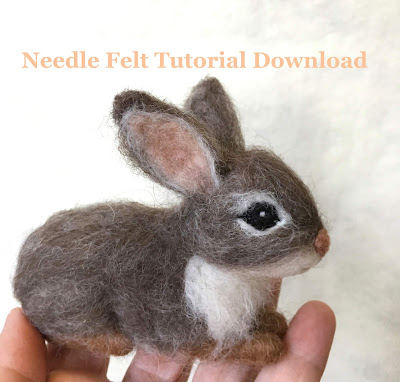 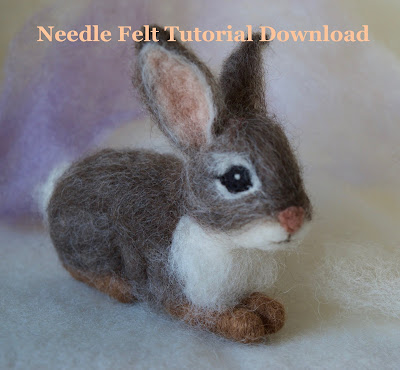 
The bunny would take 2 to 4 hours to make and it can be accomplished by a beginner with basic needle felting experience. 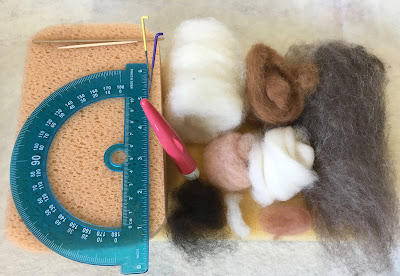 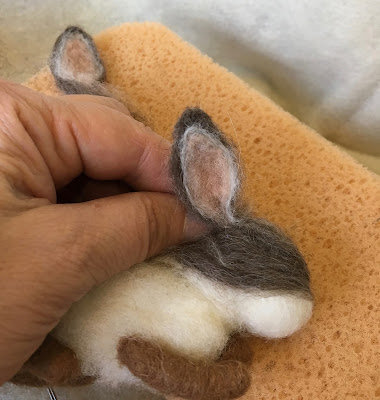 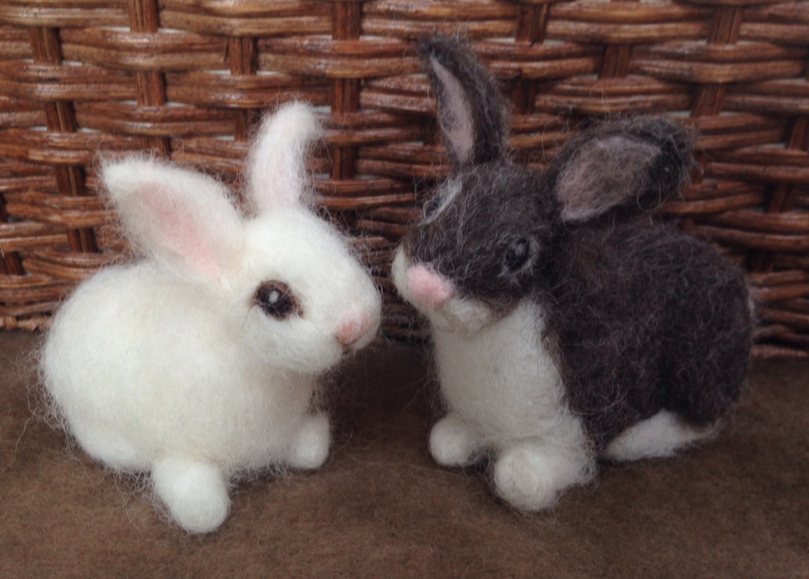 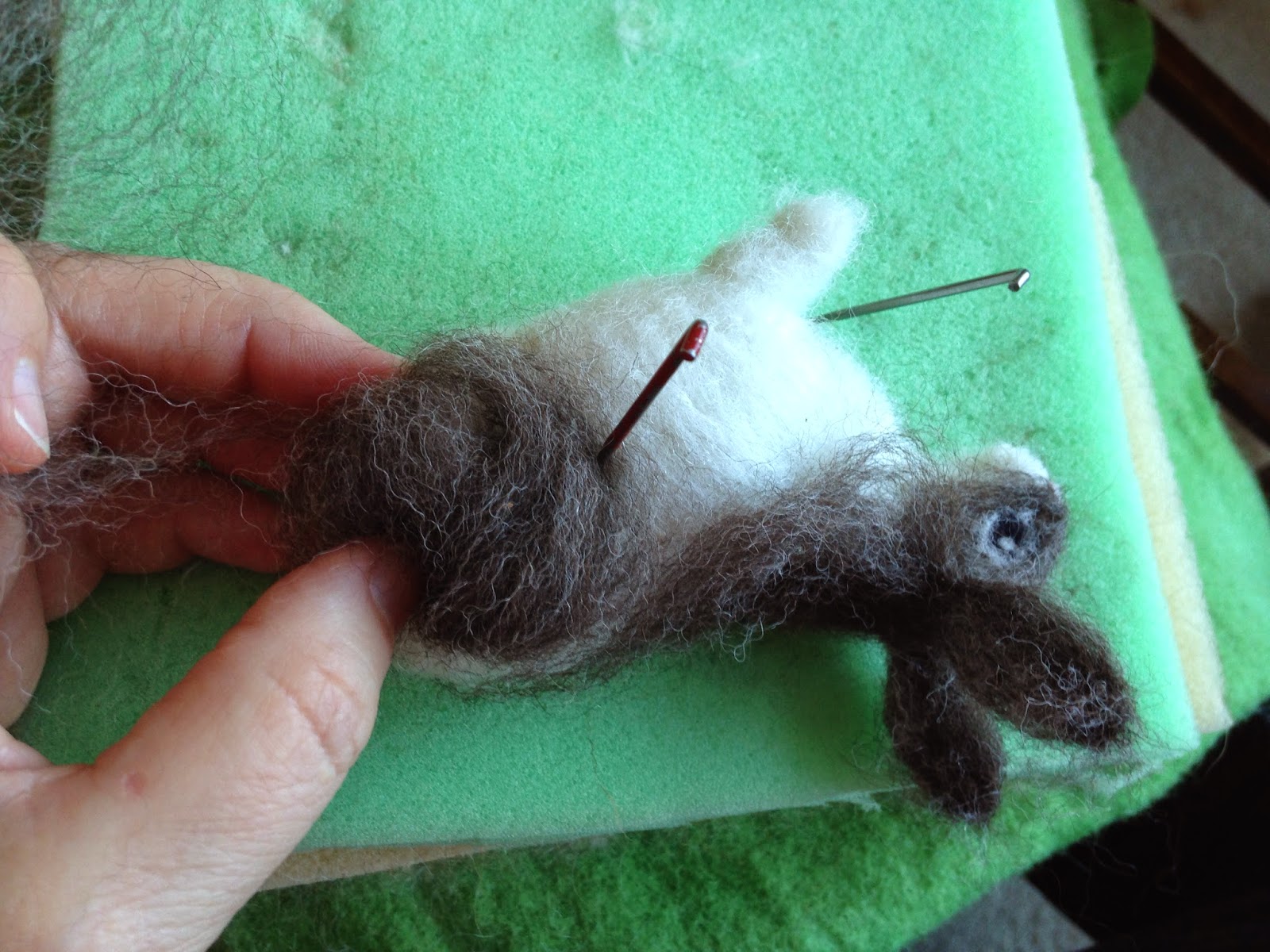 This bunny is Copyright Claudia Marie Felt. Please use this tutorial for personal use and do not sell the bunny you create. Thank you!

And here is another book that might help you get started needle felting animals:

Posted by Claudia Marie Felt at 6:50 AM No comments: